According to Niayesh Afshordi, Perimeter Institute Associate Faculty member, we are all living in the event horizon of a huge higher dimensional black hole.

In 2000 Gia Dvali, Gregory Gabadadze, and Massimo Porrati published a paper, “4D Gravity on a Brane in 5D Minkowski Space”, in which they wrote:

The observed weakness of gravity may be due to the fact that we live on a brane embedded in space with large extra dimensions.

The universe appears to us to exist in three dimensions of space. This is a three-dimensional (3D) universe. Imagine that our 3D universe is a subuniverse or brane embedded in a bulk universe that has four spatial dimensions (4D). All known forms of matter and energy are limited to our brane and cannot move to the bulk. It is like flatland, two-dimensional figures live in a two-dimensional world: 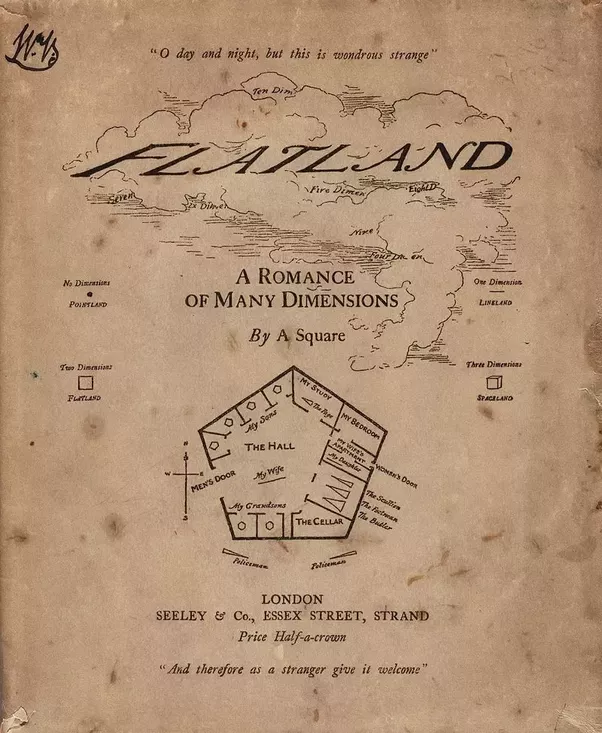 Only gravity can propagate in the bulk universe and in 5D Minkowski space, the brane model of Dvali, Gabadadze and Porrati (DGP).

In 2013 three Perimeter Institute researchers, Razieh Pourhasan, Niayesh Afshordi and Robert B. Mann, carried out calculations and argued that it is possible to track the beginning of the universe back to an era before the Big Bang, and we can even avoid the Big Bang singularity. They published their findings in a paper under the title, “Out of the white hole: a holographic origin for the Big Bang” in which they have written:

… our universe emerges from the collapse a 5D “star” into a black hole, reminiscent of an astrophysical core-collapse supernova. In this scenario, there is no big bang singularity in our causal past, and the only singularity is shielded by a black hole horizon.

Thus a 5D black hole (in four dimensions of space and one dimension of time) could have a 4D event horizon (in three dimensions of space and one dimension of time), which could spawn a whole new universe as it forms, that is to say, our entire universe came into being during stellar implosion that created a brane around a black hole. This suggestion avoids the Big Bang singularity. In the standard story, the Big Bang began with a singularity where laws of physics break down. Instead, the scholars postulate that the universe began when a star in a 5D universe collapsed to form a black hole. Our universe would be protected from the singularity at the heart of this black hole by the 4D event horizon. 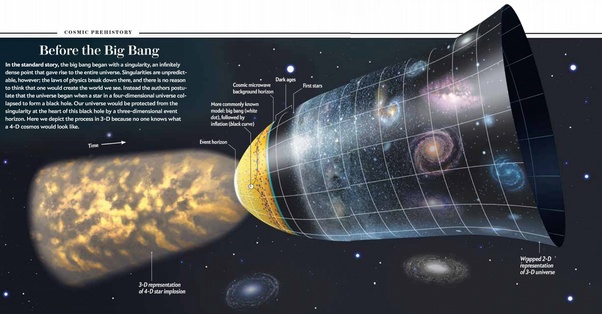 Scholars first define the brane subuniverse and the bulk superuniverse:

… one way to describe our four-dimensional universe is through embedding it in a higher dimensional spacetime — with at least one more dimension — and investigate its gravitational and/or cosmological properties. This is known as the “brane world” scenario, where the brane refers to our 4D universe embedded in a bulk space-time with 5 or more dimensions, where only gravitational forces dare to venture. Well-known (and well-studied) examples of such scenarios are the Randall-Sundrum (RS) model [bulk universe in a 5D anti-de Sitter space] where 4D gravity is recovered through a compact volume bulk, or the Dvali-Gabadadze-Porrati (DGP) construction…

And then they add the requirement of the holographic cosmology:

and the radius of our holographic universe < the horizon radius.

I always believed that language helps or drive our thought process.  But does an increased vocabulary change the way a person thinks? I&...